Welcome to Dizzy for Kindergarten! Launched...

Welcome to Dizzy for Kindergarten - a blog for teachers!

Unfortunately, I did not win a trip to Hawaii, nor am I going there for spring break :(  However, we had a "multicultural" night at our school, where each grade level had to learn about a different culture, so kindergarten learned about the wonderful paradise called Hawaii!  I was really surprised at the complete lack of materials that are available to help one teach kindergarteners about Hawaii, so I had to make up most of it as I went, with LOTS of changes, additions, and improvements for next year!  Once I get it all together I plan to post it on TPT so if someone else finds themselves in a bind like I did, there will be at least 1 resource available! Anyways, here are a few of the things we did....

To reinforce our map and geography skills, we talked about what actually an island is, and how Hawaii is so very far away from all the other states and countries.  It is literally in the middle of the ocean!  We used water paints to paint a map of Hawaii focusing on carefully painting the land green, and the ocean that surrounds the 8 main islands blue.  One of my kids very seriously asked me how they go to the bathroom in Hawaii... umm... in bathrooms like everyone else?  Unfortunately that wasn't the answer she was looking for!  She wanted to know how they got toilets to Hawaii since it is an island!  The things kids worry about! 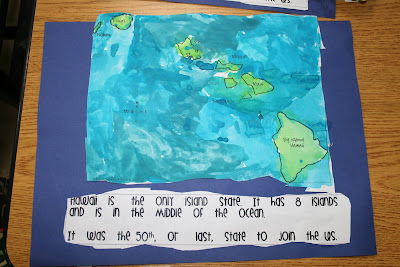 Next we made a TLC style Hawaiian flag, since the 8 stripes represent the eight main islands.  I thought the corner of the flag would be tricky, but they turned out pretty good! 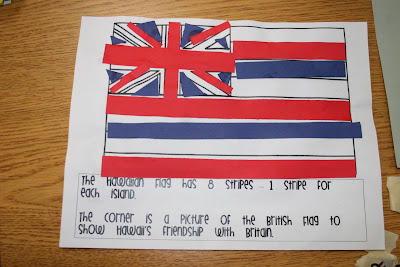 Hawaii has some pretty unique features, so we talked about some of the food they grow there.  We were surprised to find out what a pineapple plant looks like (and that each pineapple plant only produces 1 pineapple!) and compared a real pineapple to the coconut that we cracked open earlier this year. 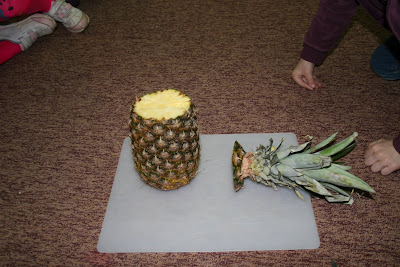 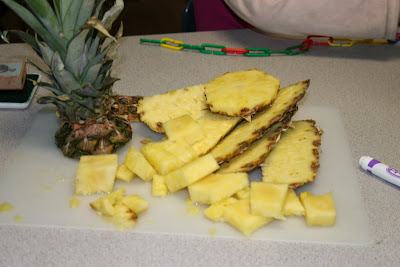 Of course we all got to taste a piece (or 2 or 3) and either you liked it or you didn't!  There weren't any in-betweens with this one!
Then we made a pineapple craft out of pine-cones.  Trying to find the right type of pine-cones this type of year was a challenge!  Luckily, I had a resourceful parent who picked some up in the park by here work!  Note to self: collect pine-cones in the FALL next year! 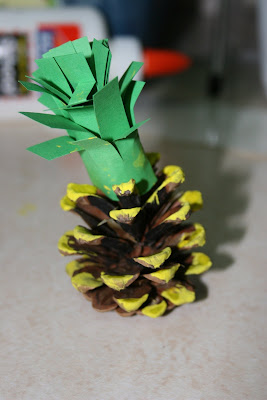 I also tried making a pineapple out of a very small lunch bag.  However, during my experimentation, I got covered in paint, so I could only imagine what my class would look like, so I stuck with the pine-cone!  If you are more adventurous than myself, or don't have a wonderful parent to provide you with pine-cones, you can try this one and let me know how it goes! 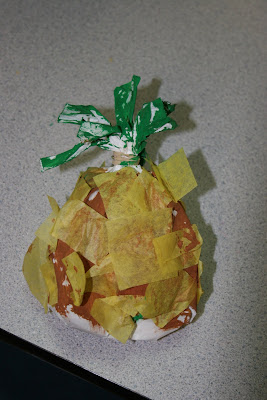 The kids were instantly intrigued when they found out that Hawaii had VOLCANOES!  In college I double majored in Early Childhood and Geography and Environmental planning.  Why?  Well, I wasn't sure if I wanted to teach or be a meteorologist (two complete opposites!) In the process, I fell in love with plate tectonics and geomorphology (the study of how the earth was formed), which includes volcanoes. So, needless to say, I am a History/Discovery/Science Channel geek on the side, and NEVER did I dream that I would be explaining the various types of volcanoes, lava, etc to kindergarteners!  I LOVED it!   To reinforce that Hawaiian volcanoes are not the "blow the top off - Mt. St. Helen's" type, but rather ooze lava, we made the project below.  I added red paint to glue, and told the kids they were SUPPOSED to make puddles with it around the top of the volcano. Then they had to hold and turn and slide their paper to get the "lava" to ooze down the sides.  Of course we did the baking soda and vinegar experiment too! 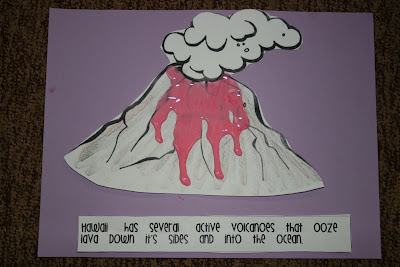 Can you tell which that I took the picture before the glue dried?

This led us to learn about the state bird, the Nene, or Hawaiian goose, which lives on the slopes (not the interior like the kids thought) of the volcanoes.  This was just a simple follow the directions coloring project, reinforcing that we can't always color everything in our favorite, rainbow colors. 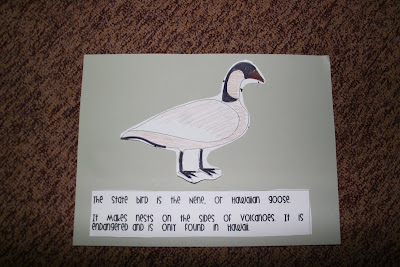 Hawaii is the home to unique marine life as well.  So we made close to life size sea turtles!  As a class we took turns tracing the turtles on large paper, projecting the image from our Promethean board.  Then each table had to work together to paint them.  I had planned to paint them, go to lunch/recess and cut them out, but they took a full day to dry!  So we had wet turtles basking around the room, drying off under the fluorescent lights! 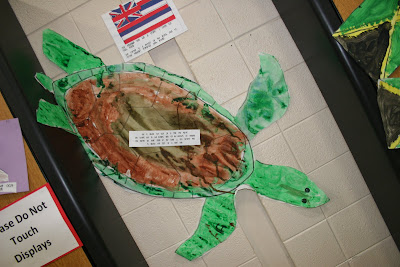 Of course, no study of Hawaii would be complete without lei's and grass skirts!  I ordered some flowers from oriental trading company, (yes, they have holes in the middle), cut some colorful straws into fourths, and gave the kids a large plastic needle with yarn.  They had to string a  pattern - flower, straw, flower, straw, etc.  They looked great when we finished! 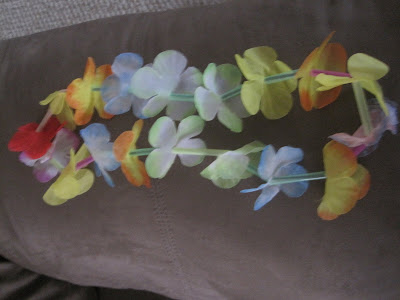 We also made grass skirts out of green (Eco-friendly too!) garbage bags! I found them on Amazon and since they were about the same price as regular garbage bags I figured whatever I didn't use, I could use at home!  The kids had to lay them on the floor, and cut strips up starting from the bottom. 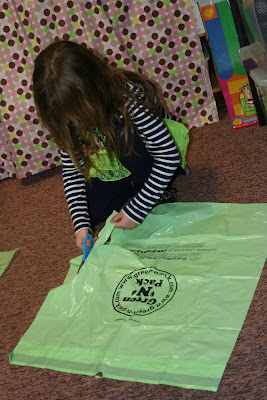 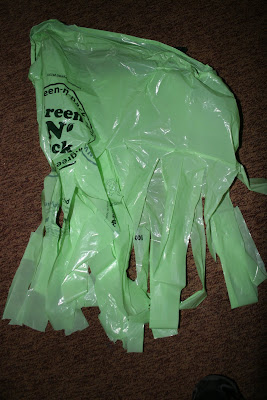 They put them on like a regular skirt, and the bag's drawstring handles served to tie them around their waist - a 1 size fits all solution!  The kids were so excited the even took scraps to tie around their wrist and ankles so they could look like real hula dancers!
Now the only thing left to do was practice the hula!  (it was harder than you might think to find appropriate hula video clips on YouTube where everyone isn't scantily dressed!)  Here we are practicing.  Almost everyone (including the boys!) joined in!  I love kindergarten! 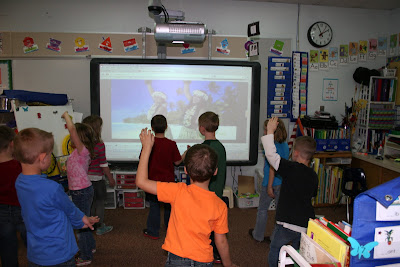 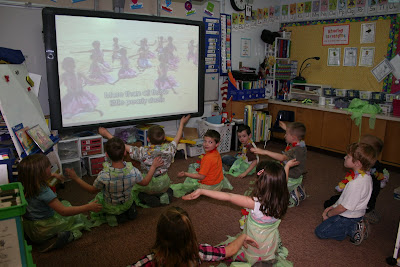 We finished it off by watching Lilo and Stitch and the kids kept pointing out the things we learned about when they saw them in the movie!  What fun!
Posted by Jenny at 10:48 AM

Email ThisBlogThis!Share to TwitterShare to FacebookShare to Pinterest
Labels: Hawaii